Secrets From Your Sister: Fitting Experience & What I Tried On

Last weekend, I went for my first fitting in a long time. I’m usually comfortable just ordering lingerie online and fitting myself, but with so many size changes going on I decided it was time to take a little adventure to a boutique. I opted to go to Secrets From You Sister, one of a few nice boutiques in Toronto, Ontario. I chose SFYS for two reasons: One being the stock they carry. SFYS carries a larger number of 28 bands in my experience than other boutiques in Toronto, as well as brands such as Fortnight and select Mimi Holliday styles. The other reason I opted for Secrets is that I enjoy the atmosphere. It’s always feels light, airy and clean, and I’ve had generally good fitting experiences there in the past ranging from neutral to awesome.

This time, my fitting experience was definitely on the awesome end of of the spectrum. I had a lovely fitter named Sam with whom I had a great time geeking out with– discussing Ewa Michalak, Comexim, and Mimi Holliday, as well as our opinions on more mainstay brands like Freya, Superbra and Cleo. We even discussed the online fitting community at large, various blogs, Reddit, etc. I was pretty amazed to learn that she, and others at the shop, read my blog! It was a weird, wonderful, and humbling experience to meet readers in real life, and I’m just happy that anyone appreciates the stuff I spew from my brain in any capacity.

While at SFYS, I tried a number of styles. I didn’t wear any of them long enough to do a thorough review, but I can provide you with my first impressions of them and their basic fitting quirks. 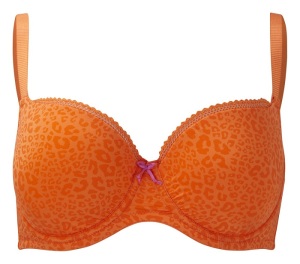 Maddie has a very firm band, so I found a size up to be ideal. This is the moulded t-shirt Maddie, not the lightly padded version, and the two definitely have their differences in fit. The moulded t-shirt option runs very firm and pretty normally in the cups, whereas the lightly padded version has a stretchier band and shallow cups. I think if you have considerably projected breasts you may want to stay away from this iteration of the Maddie as well, but for people like myself who aren’t especially projected or shallow, it’s a good option for a t-shirt bra. The shape is super, super round. It fit me nicely in a 30DD.

The design is pretty garish in person in my opinion, but I’m all for subtle colours so it only makes sense that it wouldn’t be for me. This is definitely not a style for the faint of heart! I’m keen to check out the continuity versions now though. This bra features fully adjustable straps, and two rows of three hook-and-eye closures in the size I tried. 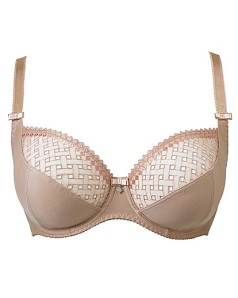 Once again, the Gia also had a really firm band. I tried it in a 28E and could not take a deep breath comfortably. I had heard that Curvy Kate had altered their cuts to fit more narrow and deep than they used to, and I definitely found that to be the case! The cups “fit” me in the 28E, but I did have puckering at the top of the cups since this particular 3-piece cup construction isn’t a perfect match for my shape. I imagine in a band size up, the puckering would have been worse since the bra would’ve have been held quite as close to my body. I’d recommend this to anyone looking for a really firm band and deep cups. This bra features fully adjustable straps and two rows of  three hook and eye closures in the size that I tried.

Well… I wish I could say much of anything about this bra, but it was the most confusing lingerie related experience of my life. The band fit like a firm-ish 28, snug yet comfortable, but the cups were deeply confusing. It’s like they were trying to get away from my body. The wires were narrow and the cups seemed fairly deep, not unheard of, so I’m not sure how to express how this bra was behaving on me. It’s like nothing would tack to my body despite the firm band, and the cups gaped something silly. Not a good bra for me. I wouldn’t recommend it for wide shallow shapes. I’m pretty even and it didn’t work on me, but I don’t know how to express why, so I don’t want to write it off for others who would also call themselves even. As always though, if you love the look give it a shot anyway! You never do know how it’ll turn out until you test it yourself. The Carmen has fully adjustable straps, but I honestly don’t remember how many hook and eye closures it had! My money is on 5.

I was pretty excited to try the Envy, and it did not disappoint! In a 30DD, this bra gave me a lifted, perky shape, and the materials felt lovely. The band was a touch loose on the loosest hooks, but nothing I would consider unwearable, meaning I’d consider this bra a fairly firm 30, but not a full size small by any means. If you’re between band sizes, maybe consider sizing up. The gore was delightfully narrow and tacked perfectly. I was largely interested in trying the Envy to see how well I could pull off a 30DD in the body suit that’s set to come out. If the body suit accurately reflects the bra, then I should have no issues with getting a decent fit! This bra features fully adjustable straps and two rows of three hook and eye closures. 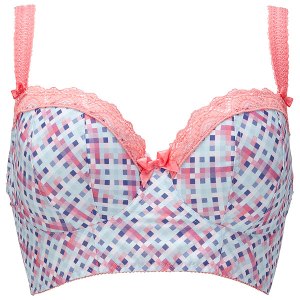 I haven’t tried on a Freya longline in a while, and have always been especially curious about the Piper. Both bras are made of lovely soft materials consistent with previous longline releases, and both feature fully adjustable straps. The Piper fit fairly normally in the cups in the 28E I tried, coming up just slightly small on my larger side, but I definitely would have needed a size up in the Hopscotch. Lots of spillage in that one! In my experience, any Freya longlines with the lace edging at the top of the cups (Edina, Just Flew In, Hopscotch) run small in the cups, whereas styles like the Piper or Patsy run normally. Piper’s band was a pretty true 28, whereas Hopscotch was stretchy. I should note that Hopscotch was a lot more attractive in person than in the product photos. I wasn’t crazy about the design online, but now that I’ve seen it in the flesh, it has a certain charm.

This bra from Mimi Holliday is very shallow friendly, and the wires are quite wide. I couldn’t get this one to tack to me in a 28E or 28F due to having too much projection and center fullness (and I’m not especially projected or full at the center, this bra is just super shallow). If you’re petite, watch out for the super long half adjustable straps. They were far too long for me in both sizes I tried, but were slightly better in the 28E. The 28 band in this style felt very firm on me, similar to the Curvy Kate Gia that I mentioned earlier, so I would have preferred a 30. Sadly, Mimi Holliday is pretty inconsistent in terms of fit as a brand, so many of their styles vary a lot in cup and band size. As with many of Mimi’s bras, this bra features one row of four hook and eye closures. Some people may find the narrow band uncomfortable, but because the materials are often so soft, I rather like it! It has a “barely there” feeling about it in the right size.

If you live in the Toronto area, I recommend Secrets From Your Sister if you need a fitting. Alternatively, if you would like to check out more than one fitting boutique, I’ve had great experiences at Tryst as well. The only major downside to Tryst is that they don’t carry Fortnight or many 28 band options, but if you don’t require either of those things, then there’s not much of a downside at all! Their service has always been lovely as well.

8 thoughts on “Secrets From Your Sister: Fitting Experience & What I Tried On”