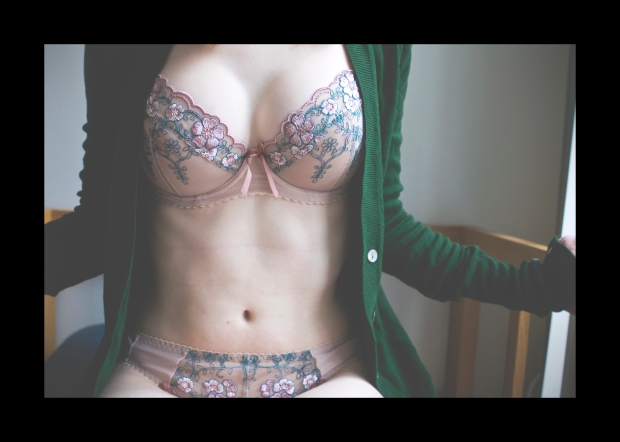 Fairly tales, high fantasy, elven queens, forest nymphs– these are just some things that the SM Burek set from Ewa Michalak reminds me of.

I had initially hoped to custom order the Burek in the HM style (their unpadded half cup shape), but was told that EM is currently taking a break from that style in favour of the SM. The Burek was much too pretty to pass up though, so I placed a regular order for the standard SM and am officially hooked. I know, I know, I already own the SM Bezyk, so why is it that the Burek hooked me instead? Let’s get right into it. 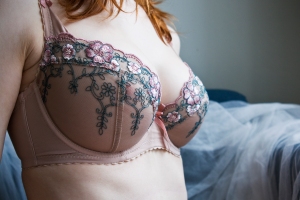 The Burek seems to fit a touch larger in the cups than the Bezyk, though I don’t think it would be noticeable to someone not heavily entrenched in the world of bra fitting. However, for me this difference is enough to consider the Burek to be a more comfortable fit. The mesh cups are quite low-cut and feel soft and delicate, yet offer such amazing lift and shaping power that I’m tempted to believe Ewa Michalak is a powerful sorceress who uses her powers to benefit all who want beautiful and supportive lingerie. Or she’s simply a thoughtful designer. Take your pick.

As I mentioned in my Bezyk review, the way the straps meet the cups seems to aid in the SM style’s ability to bring everything front and centre. I’m beginning to wish that all of my unlined bras had this feature, as it not only feels incredibly secure, but also adds to the visual appeal of the bra. The embroidery on the cups is surprisingly invisible under t-shirts, but its texture will show under anything too tightly fitted or thin. I tend to wear looser, bulkier tops, so this is a-okay by me! 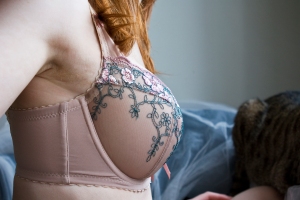 As you can see from the profile, the shape is rounded, forward facing, and a bit minimized. It’s a shape that I’m coming to love more and more as I wear this style. The wires are perfectly in line with the Bezyk, so I believe the narrow width of the SM style is consistent. If you always find yourself thinking “gosh, I can never find wires that are narrow enough for me,” then the SM style could very well be for you.

Let’s talk a bit about materials. The Burek has a silky quality to it that I’ve yet to encounter in any other Ewa Michalak, which makes it feel more expensive than it really is. In my opinion this makes the Burek a real steal given its relatively inexpensive price of $55 CAD (159 PLN). While I would never complain about the materials used in the Bezyk, the Burek’s softness is a welcome feature.

The band on the Burek feels like a standard 65 (30) from Ewa Michalak, meaning it  runs firm enough to fit someone who would generally wear a 28 in most UK brands. I have been exercising lately, and as a result have lots a little bit of weight and now need to wear my Bezyk and Burek on the second hook. Since both of these bras feature four columns of hooks and eyes, this is absolutely not a problem with me. It’s actually kind of nice to have the option to let the band out by one setting if I just ate a large meal for optimal comfort. The flexibility of four adjustment settings wonderful, and I wish it were a standard feature among most lingerie brands.

This bra is quickly becoming a favourite, and while it only just arrived recently it has already been worn multiple times (and perhaps for consecutive days– whoops). Ewa Michalak bras are the closest to feeling custom made for my body that I’ve ever experienced. I have had a lot of fun experimenting with countless lingerie brands, but I think in the future I’ll generally be sticking to just a few that I know work for me, and Ewa Michalak is sure to be one of them.

** A quick side note about the briefs. I usually don’t order matching sets, but Ewa Michalak is one of the brands I’m going to make an exception for in the future. I bought these in an 8(36), which matched my measurements perfectly. They’re made of the same silky materials as the bra, and don’t show too many lines under my clothing. All in all, I recommend the matching undies from Ewa Michalak if you’re looking for a set.

Coming up soon will be another Fortnight long line review, as well as another Ewa Michalak SM review. After those two reviews I’ll start getting to some non-review content! What can I say, reviews are my favourite part of blogging, so I hope my readers love them as well.