A while ago I made a post about what all my bras are for, and how I plan which bras to buy based on their functionality. Well, sometimes you get thrown a curveball and have to toss your plans out the proverbial window. The curveball I speak of is sudden growth. My 28FF bras that I got only three or four months ago are too small. Sigh. The Just Flew In longline bra that I reviewed only a couple of weeks ago was too small for me only a few days after purchasing it. Thankfully, I got my hands in a 28G, and it fits beautifully. One more thing to be thankful for is the Cleo Marcie. It still fits fantastically in a 28FF, as the upper section is very loose, and if anything I fill it out better now than I did months ago when I purchased it. Marcie really saved my ass.

I decided to sell a whack-ton of bras (most of my 28Fs, and a few 28FFs) to make money for some new 28Gs and larger 28FFs. I did keep a little collection of bras that are too small, in case I should return to a smaller size once I start exercising more. I’m still waiting for most of my new bras to arrive, but I’m glad to at least have a couple that fit me properly at this point. 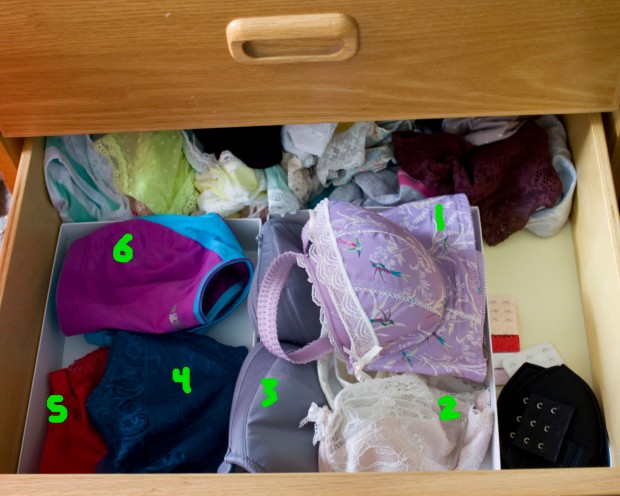 From this list, only three are every day bras (Marcie, Andorra. Just Flew In)! I’ve been cycling through these bras pretty heavily, so I’m very much looking forward to getting a few more. These new bras include…

I could never afford all of these bras if I didn’t sell my old goodies (and pick up an extra shift from work), so I’m very thankful to have found so many buyers. On another topic though, I’ve been wondering what would spark such a sudden increase in size, and have two theories that may both be contributing factors…

Boobs can be such trouble makers sometimes.

9 thoughts on “Collection in Shambles”