I have to admit that I wasn’t super keen on Just Flew In when I first saw it. I do like the pattern, but I just wasn’t too crazy about the lilac colour. However, I was crazy about a longline bra in a 28 band, and after hearing from a friend how pale the colour was in person (regular readers MUST know how much I like pale colours by now), I decided to order it and test the bra out for myself. I have to say, I was not at all disappointed. 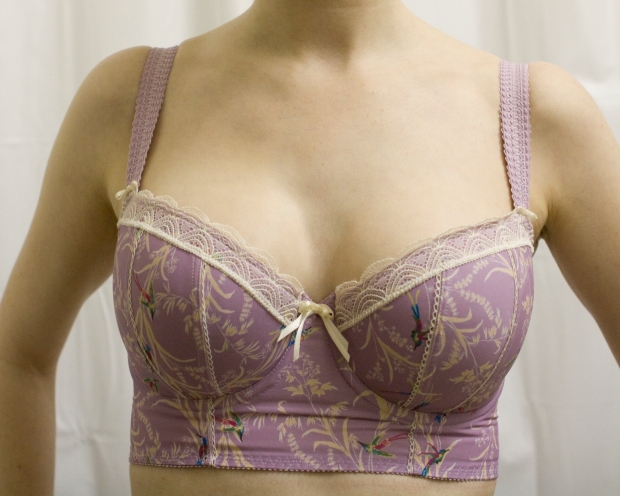 The fit is exactly spot on for me in the cups. I have no gaping or spillage anywhere, which leads me to believe it fits pretty true to size (28FF is more of less my standard size at the moment). I’m not very used to half cups, so the feeling of having the whole upper half of my breasts exposed is something I need to get used to, but I don’t feel unstable wearing this for general daily activities. Would it be my first choice to install an art show or help friends move furniture? No. I would probably need to re-adjust a few times to make sure everything stayed put in those situations. Compared to the other half cups that I’ve tried (Ewa Michalak CHPs and the Masquerade Rhea), this bra feel the most stable, and I’m pretty sure I can attribute that to the extremely sturdy longline band. I do think the cups offer a bit more coverage than the other half cups I mentioned as well though.

Three-quarter view. Ugh, awful photo, but roll with it! 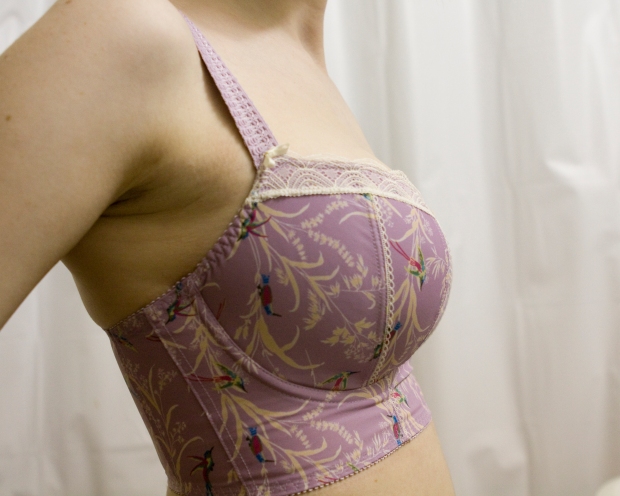 Side view. Round, but not a perfect sphere. I’m a big fan of the shape.

The band features six hook-and-eye closures, and has two settings for tightness. I really do wish there were at least three settings, as having two just makes one feel like they’re not getting their money’s worth out of the bra. I think the band runs pretty true to size, veering toward the stretchy side. I have it closed on the tightest hooks immediately (I plan to have the band altered when it stretches), but I have to say that the fit is lovely on the tightest hooks. Since the weight of the breasts is dispersed over a larger area, I really do feel a difference in comfort. I can safely say that longline bands are the most comfortable I have ever worn, and I wish it was a more standard feature on small-band-big-cup bras. I don’t expect ALL the bras to come in longlines, but I would love to see more brands introduce them. I’m so pleased with the extent that Freya is pursuing them, they’ve almost entirely won me back as a customer by doing so.

I know Freya’s older longline bras (Ala Nieve and Edina) had some issues with the band flipping up in the front. I am happy to report that problem has been fixed (at least for me), and it stays flat for the whole day. I am digging the choice of materials this bra features, which I assume are indicative of all Freya’s longlines. The cups are made of a very light foam, and the outside feels silky. The wires are perhaps a bit wide (I generally need narrow wires), but not as wide as say, Cleo by Panache (Marcie, for instance, is quite wide). They aren’t a perfect match for my shape, but don’t really cause any problems either. I don’t experience any discomfort or digging in from the wires, band, straps, anything! It’s a very comfortable bra to wear for a full day.

So if I haven’t made myself clear, I absolutely love the longline style, and I also love finally having a halfcup that works for me. I definitely plan to purchase more longline bras as they become available in the upcoming seasons. Deco longline, you’re next!

← Just What are all my Bras for Anyway?
Bras Under Shirts →