Hi all! Sorry I’ve been gone for a while! I’ve been busy with school as well as catching up with all the friends that I’ve been neglecting from said busyness. I’ve received a couple of bras in the mail since my last post, namely Miss Mandalay’s Paris and Cleo Marcie. I won’t bother to review Marcie because there are already many fantastic reviews on the blogsphere, but Paris hasn’t been talked about much, especially not in this beautiful jet black. 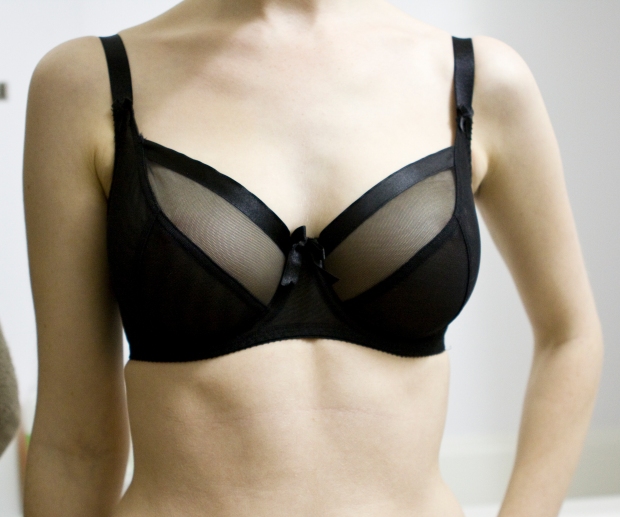 This bra is beautiful, definitely one of my favourites and truly the prettiest “basic” black bra I own. Design-wise, I love the simplicity. The satin ribbons make it feel special without being loud, and the mixture shiny and matte fabric is eye-catching. The shape is one what I prefer for everyday: natural, minimized and rounded.

Paris, three-quarter view. I reduced the blacks in the photo so you can better see the bra and where the wires hit me.

Paris features fully adjustable straps (a great change from Paige) and three sets of two hook and eye closures. The band feels almost exactly the same as Paige, which is a perfect fit on me. This is another great option for those who find they need a 26 band. The ribbon at the top of the cups does dig in slightly, definitely more-so than with Paige, so I’m not sure how much success fuller on top breasts would have with Paris. I considered sizing up, but I’m quite sure that I would have a lot of gaping and wires digging in if I did. The slight cutting in at the top of the cups never shows under clothing and isn’t uncomfortable, so I’ve decided it isn’t an issue for me. 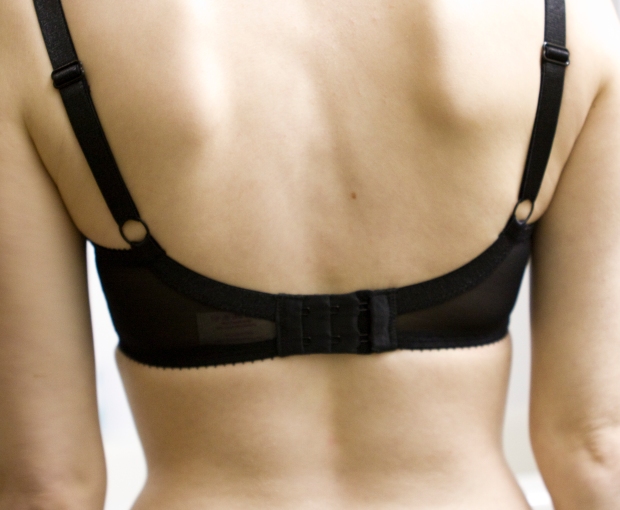 Back view. This band is a perfect fit.

Unfortunately, not everything went perfectly for Paris and I. I noticed just today when I took off this bra that the ribbon at the top of one of the cups has begun to fray.

It looks as though the seam is detaching from the rest of the bra. I do remember noticing right when I put this bra on that it did feel looser on my bigger side, which is strange since the bigger side should be filling out the bra more, but I didn’t really think anything of it. As it turns out, the side that felt looser is the same side with the problem seam, so I think it may have been a defect. I’ve contacted Large Cup Lingerie, where I purchased the bra, to see if anything can be done. I thought about sewing it myself, but I think if I did I’d probably end up making the top of the cup too tight, and since I already have a little bit of digging that would be pretty bad.

Despite the issue of the rogue seam, I really do think this is a great bra. It’s not quite as perfect a fit as Paige, but it’s pretty darn close and the simple design as really won me over. As my lingerie collection expands, I find that the two brands that work best for me are Miss Mandalay for unlined bras and Ewa Michalak for lined. It feels fantastic to have a better handle on what works and what doesn’t. Anyone else have particular brands that they tend to stick to?

EDIT: Large Cup Lingerie has offered me a replacement bra if Miss Mandalay has any remaining Paris bras in my size or a full refund. Further evidence of their fantastic service!