A review of the lovely Freya Lacey was requested not too long ago, and I am more than happy to oblige. So let’s get right into it! 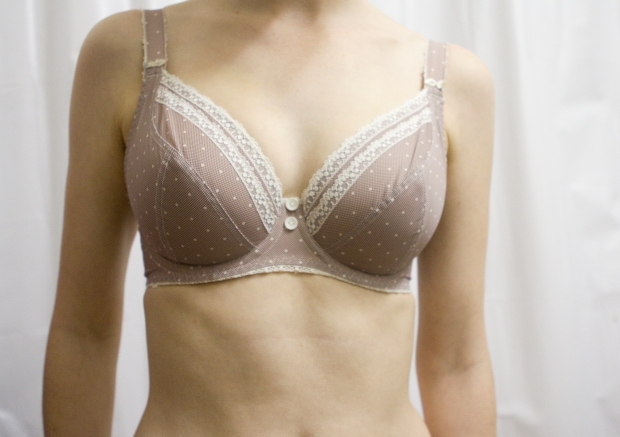 Freya Lacey from the front. As you can see I get some wrinkling in the cups because it is not a perfect fit anymore.

Meet Lacey. She’s supportive, subtle, and cute as a button. For a long time I considered Lacey my favourite bra. She has since been replaced by Miss Mandalay’s Paige in coral, but she still has a place in my heart despite that my tastes have changed. Lacey used to be perfect for me for a few reasons, the main two being that the band is very firm, and the cups seem a tad large compared to other Freya bras. I used to need bras that run a bit large in the cup, but since I seem to have shrank a bit a few months ago and now Lacey is a little big in the cups for me, but not big enough that sizing down would work. When I put Lacey on in the morning it seems to fit well enough, but I get an unfortunate amount of wrinkling in the cups pretty quickly. This could also be due to the age of the bra. Lacey is about nine months old so the cups have stretched somewhat. 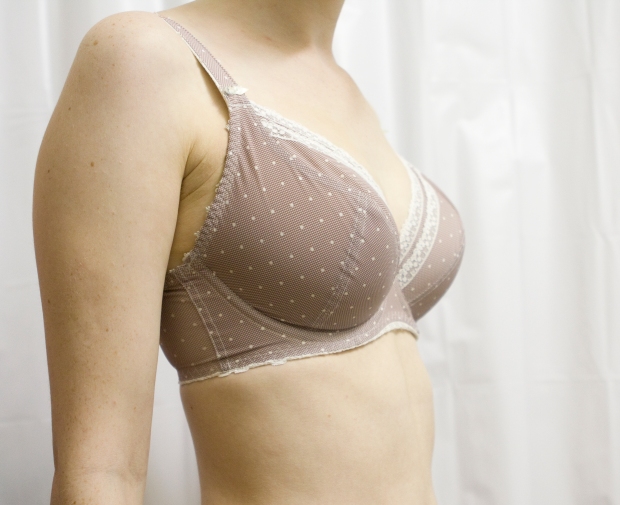 Three-quarter view. Great uplift. I find that the shape has rounded out quite a bit since I bought it just from everyday use

Lacey has a beautiful vintage inspired design to her: The latte colour, tiny white polkadots, scalloped lace at the bottom of the band, and adorable white lace trims on the upper section of the cup, it’s all great. The fabric is nice and smooth, and a little bit sturdier than expected. I remember the first time I put this on I was completely blown away by how much lift I got from it. The shape is lifted but natural and perhaps a bit pointier than I would like, but still looks great under clothing.

Lacey back view. It’s an older bra so it’s on the tightest hook now

Something great to note about this bra is that the band is still firm after eight or nine months of wear. I’m on the last hook now, but it still feels very firm. I imagine I’ll probably end up getting around a year of wear out of it. So you’ll be happy to know that Lacey ages well. It’s also important to note that I wore this bra a lot because it was my best fitted bra for a long time. It could’ve lived longer had it been in a more normal rotation with the rest of my bras.

In a 28F, Lacey closes with three sets of two hook and eye closures, and in larger sizes (I’m guessing GG+) three sets of three hook and eye closures. The straps are technically partly adjustable I guess, but I tighten them up over the front part of the straps easily. The wires are typical of freya meaning they’re thinner than say, Panache or Miss Mandalay, as well as being narrow. While I didn’t purchase Lacey with the intent of it being a basic, the beige colour worked okay as a skin coloured bra for me. It’s quite a bit too dark for my super pale skin, but still disappears under clothing better than the majority of my bras. So for lighter skinned folk this could work as a prettier version of a “nude” bra, and for darker skinned folk (or very very light skinned in my case!) it’s just a lovely bra!

← Comexim, More Awesomeness From Poland
Tower Of Heaven, The Best Game Music Ever? And Cleo Meg →